We recently ran a Facebook advertising campaign for Lichfield based BeatBox Studios with some pretty cool results! 19 Book A Trial lead generation forms completed in just four days with a potential of £7980 worth of annual business for the studio and a 698% return on investment! Not bad! Here’s how we did it…

BeatBox Studios is an urban boxing studio based in the heart of Lichfield city centre. Offering a range of HIIT (High-Intensity Interval Training) based classes, including boxing technique based classes, pad work, shadow boxing and more, BeatBox is the latest fitness craze to sweep Lichfield and the surrounding areas. Their classes are designed to suit a range of abilities, to be fun and of course, to get you fit! All in the stylish surroundings of their dark-lit studios to an incredible selection of music ranging from house and grime to R N B.

The studio has been open for nearly a year, and while membership sign-ups are on the increase through organic social media posting (with particular success on Facebook) the client was keen to see how a more comprehensive and targeted advertising campaign would work. The main objective for the campaign was to encourage people to come to the studio to experience a free trial class, and also enjoy a complimentary beverage of their choice in their on-site cafe, Blend.

Firstly, we mapped out a sales funnel; this process helps us to define what the campaign will look like, who it will target and when. It also allows us to list out all of the actions we need to take ahead of setting the campaign up, in this instance, this included creating several different audiences to test and serve adverts to and add a Facebook pixel to the BeatBox Studios website. 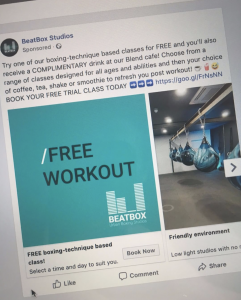 TOP TIP – using a free flowchart diagram programme online such as draw.io allows you to create a visual representation of how your campaign will work and list out the elements you need to organise (a ‘to-do’ list) ahead of getting started. You can keep referring back to this and updating it as you need to, so it’s a great starting point to build the foundations of your campaign.

Once the funnel was in place and we had a clear picture of what we needed to do, we then went on to design several different creatives to test to our audiences using Facebook Business Manager’s Creative Hub facility. From here, we could easily share the creative we planned to use and approve this with our client ahead of going live. After the creative was agreed, it was time to pull through the proposed ads into Facebook Ads Manager, and set them up.

Testing different copy and creative throughout any Facebook campaign are crucial. As much as you think you may know how an audience will react to particular messages and imagery, video etc. the truth is until you try it, you have no idea what will work best!

The first part of our campaign was set up as an Engagement campaign; we wanted our audiences to become aware of the BeatBox brand, get them engaged and then retarget them with further messaging to book a free trial. The book a free trial element of the campaign was set up as a Lead Generation campaign, linking our ads to a simple, easy to complete form on Facebook where sign-up details could be downloaded and sent to the client for follow up.

TOP TIP – Test, test and test some more! Set up different ad sets within each of your campaigns, using a variety of different copy and creative with a small budget behind it, to begin with. Use a simple naming convention to title your campaigns and ad sets, so you don’t get confused with which ad is doing what and for who and where! (e.g – BeatBox Studios_Book a Trial_April 2019_Video_Lead Gen_Cold Audience).

When we could ascertain which creative was working the best at each point of the campaign, we turned off the ad sets that weren’t working so well and added more daily budget behind the ones that were.

All of these results were achieved in under a week, and if the client chose to scale the campaign even further, they would undoubtedly receive even more book a trial enquiries and earned an even greater return on their investment. In short, Facebook advertising works! If you’re interested in finding out if this form of marketing can work for you and your business, get in touch with our team today for a free, no-obligation consultation today!
©3twelve 2020